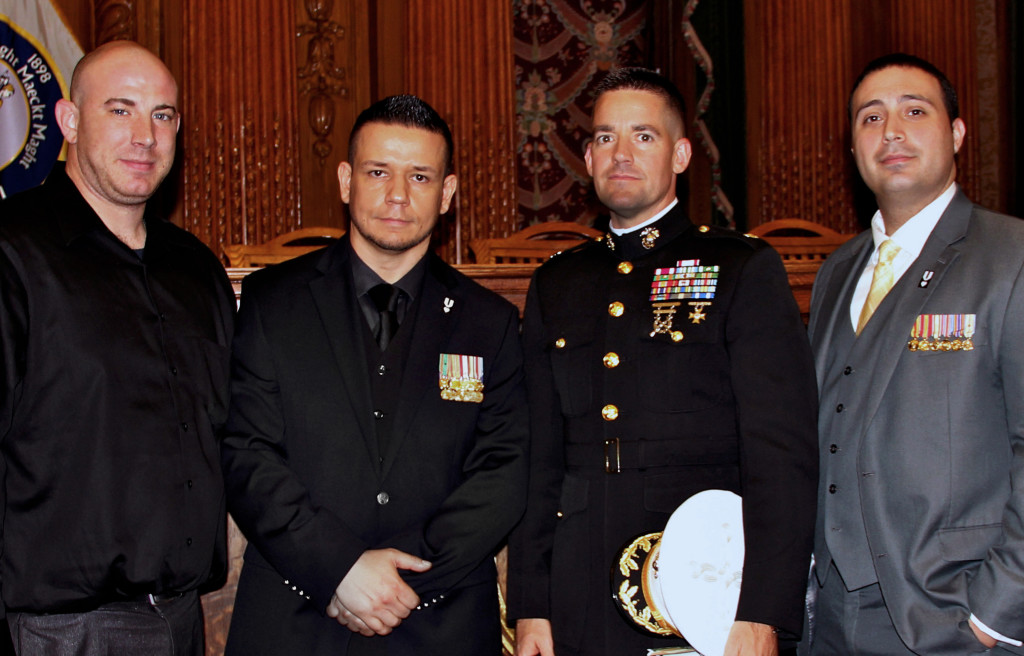 Event Honorees at the event included: U.S. Army Veteran Bryan Dilberian, who was severely wounded in combat, during his tour of duty, and was born in Brooklyn, NY. Bryan is seen above left, standing with fellow veterans who attended the one day event. Robert Bobe, an Army Sergeant first class who graduated from Boys and Girls High School in Bedford-Stuyvesant; Judge Jerome Cohen, a 90-year-old Brooklyn native and retired member of the Navy who served during World War II; CSM Fauntelroy, who has served in the Army for 30 years and is a native of Brooklyn; Joseph Frizzell, a Navy veteran who works at Brooklyn Borough Hall; Sarah Keys-Evans, a current resident of Brooklyn who served in the Women’s Army Corps during the Civil Rights era; Herbert Nicolas, Jr., a Marine staff sergeant who served as a canvassing recruiter in Brooklyn; Robert Smith, a Coast Guard captain from Brooklyn who is presently commanding officer for Coast Guard Recruiting Command; Robin Smith, an Air Force technical sergeant hailing from Brooklyn; and Andrew B. Walcott, Esq., CPA, a veteran-turned-restaurant entrepreneur from East New York. 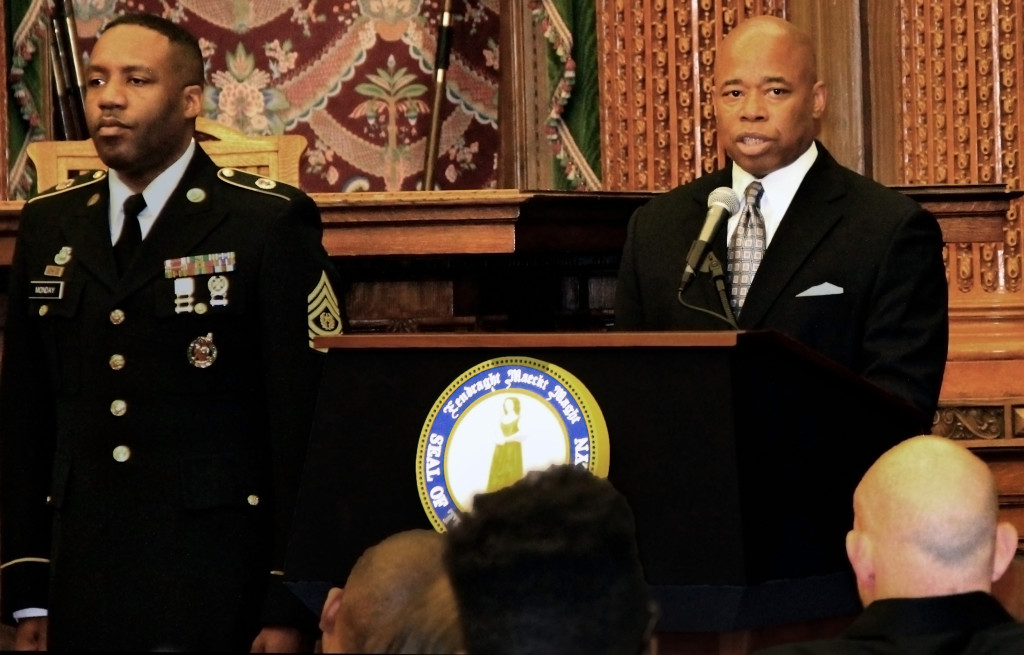 NYC Mayor Eric Adams, a former chair of the Committee on Veterans, Homeland Security, and Military Affairs during his tenure in the New York State Senate, spoke about Brooklyn’s commitment to its veterans, reaffirming his commitment to restore the Brooklyn War Memorial and to address mental health challenges facing the community: “As Americans, we cannot forget that we sit under the tree of liberty because it was watered with the blood and sacrifice of our veterans,” said Borough President Adams. “This Veterans Day, our military heroes deserve more than our thanks; they deserve full recognition of their commitment to our country and full support in building successful lives with their families back at home. On behalf of all Brooklynites, I salute our borough’s proud veteran community and pledge to help raise them up every day with words and deeds alike. Brooklyn honors its vets, Brooklyn respects its vets and Brooklyn never forgets its vets.” 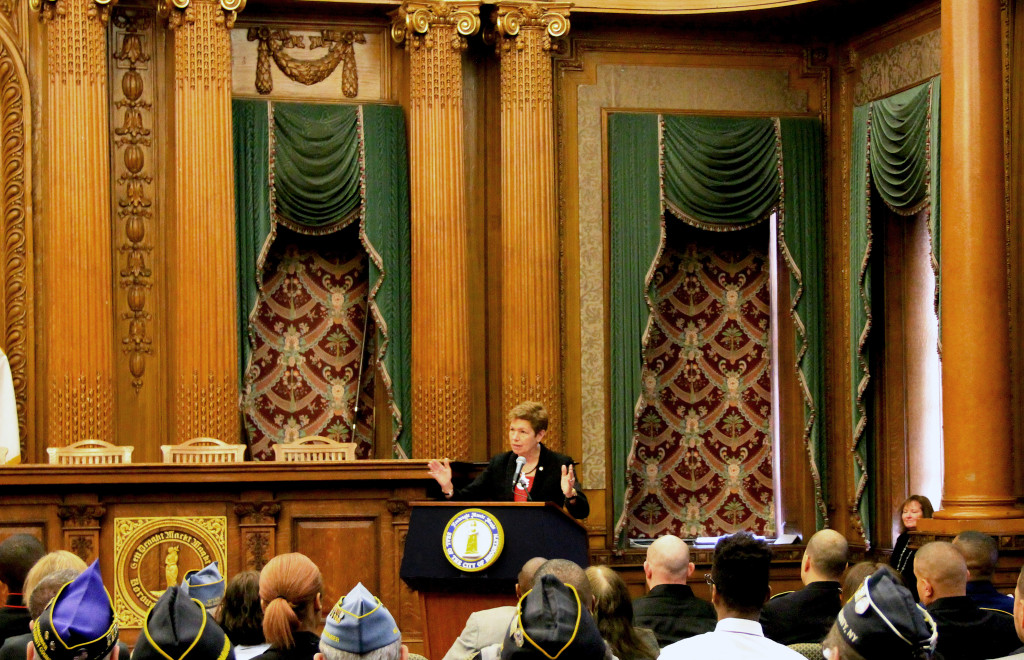 Loree Sutton, MD, Commissioner of the Mayor’s Office of Veterans’ Affairs (MOVA) is seen above addressing event attendees:  “Under the leadership of Mayor Bill de Blasio, MOVA is pleased to collaborate with Borough President Adams in ensuring that this resource fair will be a resounding success in serving those who have served us.” “Connecting veterans and their families with care, services and resources, including the nation’s first municipal ID card with a veteran designation, is an essential element of MOVA’s mission to improve the lives of the NYC veteran community,” said Brigadier General (Retired). 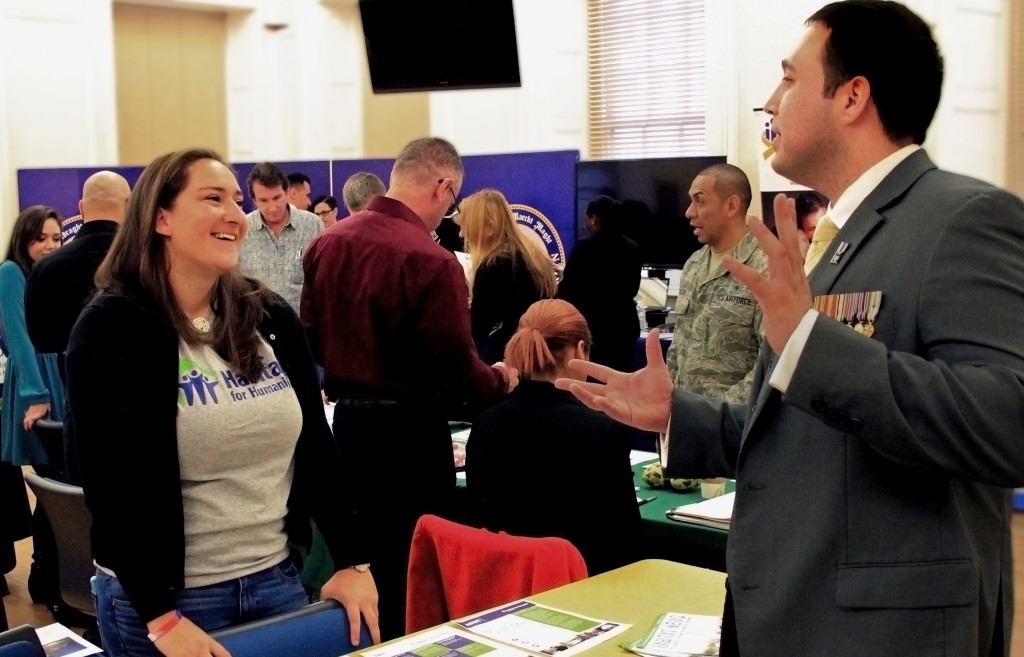 Habitat for Humanity NYC – attended the Brooklyn event to launch their Habitat for Heroes initiative, developed to combat the affordable housing crisis NYC Veterans and their families face. Habitat for Heroes supplies housing solutions as well as provides opportunities for volunteering and education. Habitat for Heroes engages our service members, Veterans, and military families through opportunities to apply for homeownership or critical home repair services, attend financial literacy classes, and answer the call to serve by volunteering at our construction and revitalization projects throughout the five boroughs. Seen above from left is Habitat representative: Katie Van Bramer, speaking with Christian Zamora of Veterans Rebuilding Life. 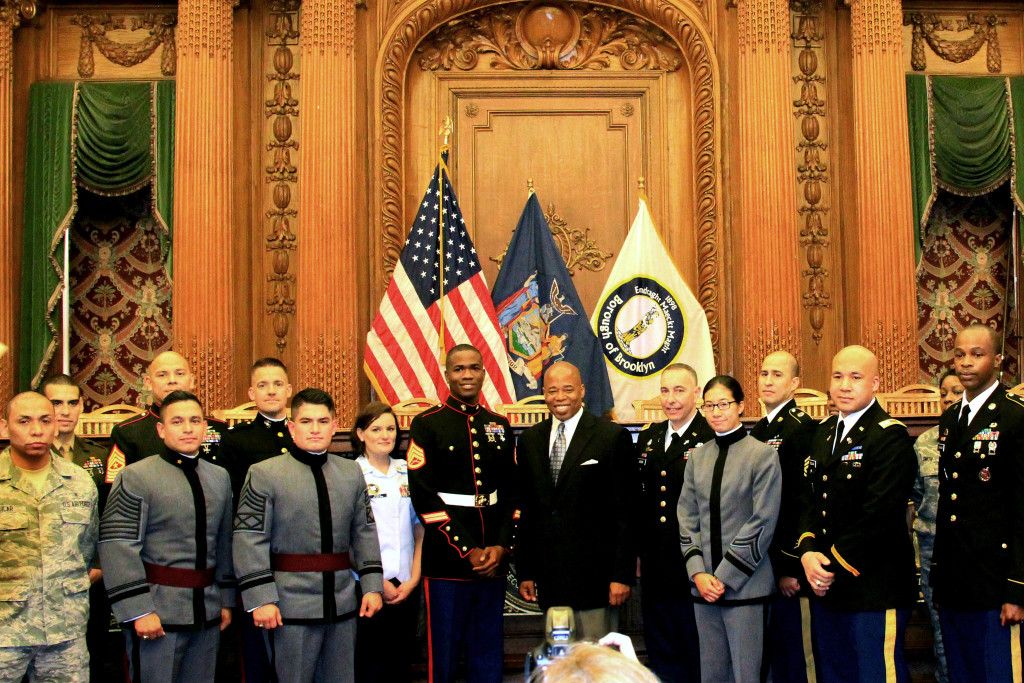 Seen above: centered alongside right of the U.S. Marine Corps Staff Sgt., is Brooklyn Borough President: Eric L. Adams, standing with local veterans from every branch of the United States Armed Forces, including West Point Military Academy Cadets (in grey uniforms) for the events closing ceremony, which was held in the stunning courtroom of Brooklyn Borough Hall, in commemoration of Veterans Day.