The Rotary Club, an international service organization comprised of community leaders whose motto; Service Above Self, defines their humanitarian mission: the advancement of international goodwill. Each year, the Rotary Club’s Elmsford Chapter located in Tarrytown, NY has granted Veterans Rebuilding Life the honor of selecting a candidate worthy of receiving the Rotary’s Annual Scholarship Award, which provides recipients with direct-financial support toward any accredited training or educational program, chosen by the recipient. 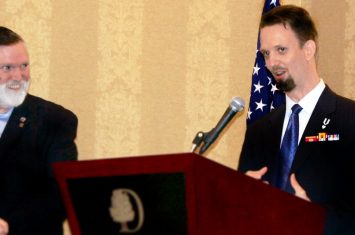 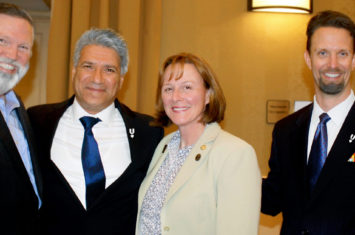 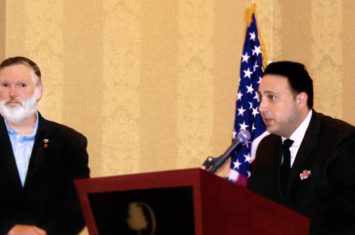 This year’s VRL candidate was Marine Corps Veteran: Jason Sagebiel, seen above-second from left, speaking at the podium. Jason served in combat operations during the Iraq War as a member of the elite: Scout Sniper platoon. During his tour of duty, Jason sustained a traumatic brain injury that changed the course of his life forever. Upon his honorable discharge from military service, Jason attempted to start life over as a civilian in his home state of Texas.

But like many returning vets, he fell victim to the VA healthcare system, which refused to provide him with the basic medical support necessary to properly address his combat-sustained injuries. Following a Marine credo: adapt and overcome, Jason relied on his gift for music to develop a holistic alternative treatment to rehabilitate himself, without assistance from any medical support services. Dedicating himself to a strict regiment of rehearsals, Jason was capable of re-teaching himself how to play the guitar– a skill he’d lost after sustaining his injury in Iraq. Soon after this achievement, Jason left home and moved to New York City, where today he teaches music to students from across the 5 boroughs of NYC.

Less than one year ago, Jason stumbled upon Veterans Rebuilding Life headquarters in Queens, NY, and knocked on the door hoping to offer his volunteer services. But upon hearing his story, and learning about the total lack of support he’s been provided, it was clear to VRL’s staff that like always, it’s those who’ve already given so much, that are willing to give even more. In response, Veterans Rebuilding Life utilized its network of legal support services to pursue Jason’s right to receive the health care he desperately needs.

Refusing to be a victim, Jason continued to insist he be given the opportunity to support VRL’s humanitarian mission. Inspired by the Rotary’s motto: “Service Above Self” Veterans Rebuilding Life continues to select candidates who have a proven record of commitment, to ensure the Scholarship’s capacity to impact as many lives as possible.